Zone 33-34 Director-Elect, Joe Mulkerrin,  on changes in Rotary meetings, engagement levels, and attraction methods as a result of the Council on Legislation meeting.  More details to follow soon.  Then Joe made the rounds of the breakouts.

Chuck Arnason,  incoming District Rotary Foundation Chair, introduced his team and goals in the Foundation breakout. It was well attended and included a number of club foundation chairs who asked incisive questions and offered practical suggestions for communication and process.  PDG/Director-Elect Joe also attended a portion of the meeting and encouraged us to stay committed to our goal of eradicating polio.  We’re in the last and hardest stages of eradication. Help that effort …

Dave invited Riptide to attend the Assembly and he did drop by.  He had a great time.

Will the web classes below on dacdb.com will fit into your schedule?  Free and informative. Login to dacdb.com, Click on Calendar, scroll down and register.

As we dive into the new Rotary year, here are suggestions to help you perform your volunteer roles as Foundation Advocates and Club Foundation Chairs.

What to do now

to register for a ‘My Rotary’ account on http://www.rotary.org

to visit the Advocates page on http://www.rotary7600.org from time to time

Check on your areas and clubs to insure that each club has entered 2015 -2016 Foundation Giving Goals including Polio Plus funds.  14 clubs have not entered any giving goals on Rotary Club Central and an additional 9 have not entered Polio Plus goals. Here is a spreadsheet date July 3, 2015 to check which of your areas and clubs need assistance  2015-16 TRF Club Goals 1.1 (4)

Register now for the Foundation workshop on August 1 in Williamsburg by logging on to dacdb.com, selecting Calendar, and scrolling down to the event

And a special request to Club Foundation Chairs …

Try to be nice to the Foundation Advocates … they are a misunderstood, but caring lot

Clubs are in the last stretch

Many clubs are going full bore to be sure that they get their clubs’ and their members’ donations into The Rotary Foundation in advance of the June 30 deadline so that it counts towards their 2014 -2015 giving goals.  Checks mailed in with a postmark of June 30 will count towards the 2014-15 year as will any contribution made online by midnight by midnight on that date.

This banner report was released by our District Foundation Chair on June 15 so is a week old, but it may provide information that is helpful.  The data is changing daily. Banner Rpt – 11 June 15 (3)

Club Foundation Chairs and Foundation Advocates should do a check this week on their respective clubs to confirm that the Foundation Giving Goals have been entered into Rotary Club Central at http://www.rotary.org.

In case you missed it

Each club has designated a club member to be the Polio Plus Ballgame Coordinator to take ticket reservations for the July 9 Richmond Squirrels Game and the July 20 Norfolk Tides game. Consider contacting your club rep now to reserve your tickets.  It is a fun, fun evening.

Rotarians can now register for the August 1 Foundation & Membership Workshop.  Cost is only $25 per person and dress is casual.  Great morning of training and information. Logon to dacdb.com, click on ‘Calendar’, scroll down to the event on August 1, click on “Register Now’ and then all you need is your credit or debit card to register. 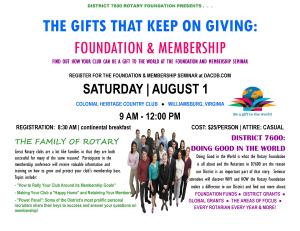 The registration interface on dacdb.com has been tweaked and works like a charm, but if you have  trouble, just contact Maryann Tetreault, the District Executive Secretary at office@rotary7600.org,

During the last two weeks the Foundation Advocates have been following up with the Club Foundation Chairs in their areas to get assessments on club giving status.  This is important to our District Foundation Committee leaders so they can accurately forecast final giving and to have one last chance to help clubs with strategies to meet club goals.

Many of the Advocates have already provided their updates, but we still need a few more follow ups.  Everyone knows that this is the time of year when clubs and club leaders are doing double duty — wrapping up the 2014-15 year and implementing plans for the 2015-16 year. 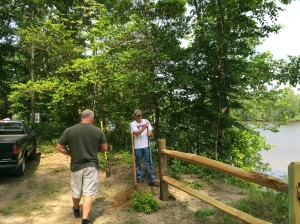 Club Foundation Chairs don’t just serve as club leaders.  Bill Henn, white tee shirt above, got his hands dirty on May 16 working on the largest district grant awarded in 2014-2015.  The grant for $25,000 was awarded to 6 clubs to make improvements to the Appomattox River Regional Park.  The clubs were Petersburg Breakfast, Petersburg, Hopewell, Colonial Heights (lead club), Chester, and Prince George.

Thank you for all you do!

Foundation Advocates are smart people!  Here is the smartest things you can do in the next week or so —

2.  Register yourself for the District Training Assembly.  Why … you are leading by example and giving yourself the opportunity to connect with your Club Foundation Chairs and others in one fell swoop.

How to register.  Log on to dacdb.com (dacdb stands for District And Club Database). Click on ‘Calendar’. Scroll down to District Training Assembly on April 25. Click on ‘Register Now’. Pull out that credit or debit card and do the deed.

3.  Encourage your Club Foundation Chairs to log onto 7600advocates.wordpress.com and ‘Follow.’  That way they and you (if you have ‘followed’) will receive this weekly message by email.  Talk about making your role easier.  The blog is open to anyone, but is most helpful to Foundation Advocates and Club Foundation Chairs.

Thank you for all you do  …