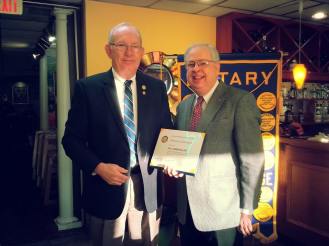 on a personal friend, Prince George Board of Supervisor’s Chair, William (“Bill”) A. Robertson.  Ken, a member of the Rotary Club of Chapel Hill, had driven from North Carolina to convey Paul Harris Fellow status on his childhood friend and non-Rotarian, Bill. The club’s President-Elect, Percy Ashcraft, whose day job is being the Prince George County Administrator, had conspired  with club President and Director of Social Services, Shel Douglas, to convince Bill to attend the meeting.  To make the presentation even sweeter Past District Governor Chuck Arnason drove in from the Blacksburg Rotary to witness the ceremony.

Later Club Secretary, Dana Rieves, was awarded her Paul Harris Fellow because a fellow member transferred recognition points to Dana to recognize  her significant donations  to The Rotary Foundation as a new member and her donation of time and talent to the club in general.  This Paul Harris Fellow recognition was a surprise as well.

A little ‘beelieving’ can go a long way.