Yes, more than a little rain fell on May 16th as area Rotarians in District 7600 attempted to assemble at the Diamond to watch the annual End Polio Now Baseball game.  Even the Flying Squirrels decided to take their acorns home for the evening.  Many End Polio Warriors made it to the Diamond and others were caught in downpours or traffic tie-ups attempting to get there.

Club baseball ticket organizers should contact Garrett Erwin at the Flying Squirrels at 804-359-3866 x327.  The same number of tickets previously purchased by the club will be reprinted with the June 14 date.

Additional tickets may be ordered as well. Remember that $2 of each ticket goes to End Polio Now and is matched 2:1 by the Gates Foundation.  If you do the math that means that $6 for every ticket purchased goes to EPN.

And many thanks to the Rotarians who made the effort among whom were AG JoAnn and Norm Meaker above and below, AGE Shel Douglass, District End Polio Now Games Organizer Stan Wall, and District Polio Plus Chair Colleen Bonadonna. 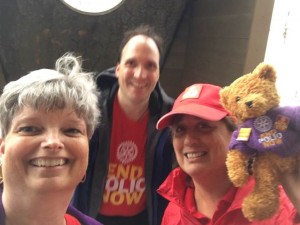